Newborn twins Olivia and Zoe Poon were separated for the first month of their lives after entering the world at 29 weeks. But once they were strong enough to be together the pair were reunited. Still surrounded by tubes and braces, they reached out for one another in a heartwarming embrace. ‘We had been waiting so long for the girls to meet so when the day finally came we couldn’t believe it,’ their mother Ann Le, from Victoria, told FEMAIL.

‘We waited 27 days exactly for our first twin cuddle and it was so much more than we could have expected.  ‘Olivia was placed on me first, then when it was Zoe’s turn she reached out her left arm and hugged her sister. ‘My tears were flowing, it’s a moment I’ll never forget. 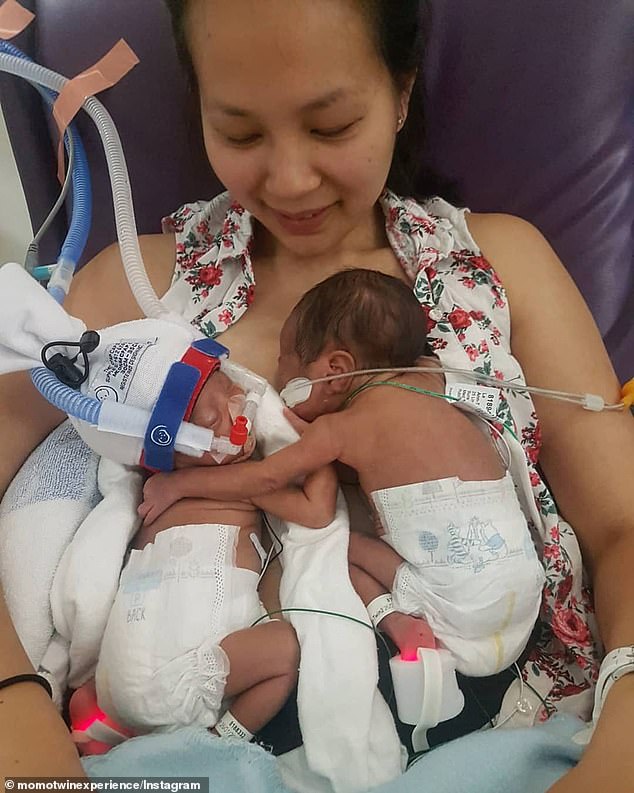 ‘Since we have been able to do twin cuddles, both us and the nurses have been able to see just how much calmer they are when they are together. ‘They clearly have a unique bond already.’ For six-and-a-half months Ann Le anxiously awaited the arrival of her identical twin girls, who were sharing the same amniotic sac inside her. Known as monochorionic monoamniotic twins, it’s one of the highest risk twin pregnancies possible, with only a 50 per cent chance the babies will survive after the 26 week mark.

Every fortnight from the 10 week mark Ann had ultrasounds to ensure the girls were progressing as they should be. ‘A little after the 26 week mark I was admitted into the Royal Women’s Hospital where the plan was to monitor me three times a day for six weeks with the intention of booking me in for a caesarean at the 32 week mark,’ the 29-year-old said. 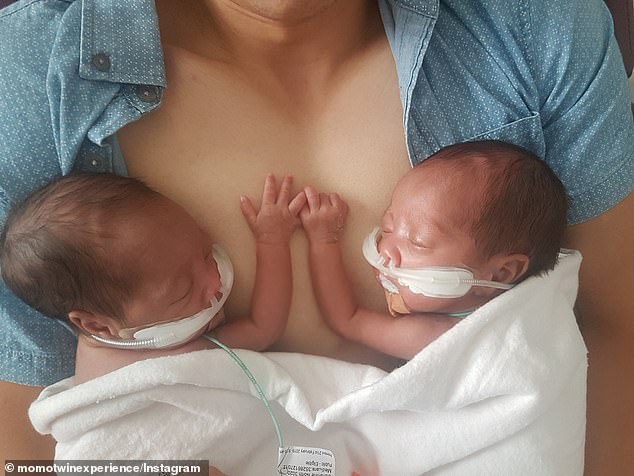 But she didn’t make it that far and after routine monitoring noticed one of the babies was in distress, the doctor decided they both needed to come out at 28 weeks and five days. ‘I was devastated as I knew they were going to be premature but not by this much,’ Ann said.  ‘About three hours after I was told,

I was taken down to the operating theatre where I was given the spinal anaesthetic which was incredibly painless and quick. ‘They laid me down, put the drapes up and within a few minutes the surgery started.  ‘There were about 10 staff in the room and eight paediatric staff in the adjoining room.